My teens are still a handful but overall they are pretty good kids. They haven't got in any real trouble. They are respectful to friends, relatives and people they meet in general. Life is pretty good right now. (knock on wood). Last school year my youngest seemed to be depressed but he seems to have pulled himself out of it after almost a year. It was rough though and he failed a few of his subjects. Luckily here you can go an extra year if you have special needs. As I said though things are going good now. I went to college and intend to go back for psychology is september. I guess its good that there is little to report. Hope my friends life's are drama free as well.
Posted by Fighting for my Children at 9:54 PM No comments: 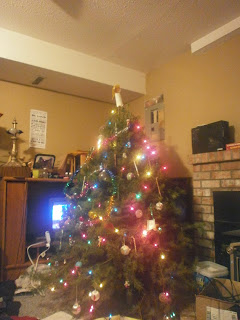 Everything is good in this autism house. The kids are teens, what else can I say.  When I say do this they say no way. I stick to my word and they usually come through after a meltdown or two.  Merry Christmas to you and a peaceful time too.
Posted by Fighting for my Children at 10:57 PM 2 comments:

My oldest started high school this September. I met with his support worker and she said he is doing good. No meltdowns, no problems at all. He is finding his way around the high school. He is using his computer where up till this year he was refusing to use it. I am so proud of my big guy!
Posted by Fighting for my Children at 10:45 PM No comments:

You're just NOT funny!

I just wanted to link to a friends blog. Please read it, share and stand up for our children!
http://aspergersinfo.wordpress.com/2012/09/22/stop-mocking-children-with-autism/
Posted by Fighting for my Children at 10:42 PM No comments:

Yesterday was a rough day. We had Easter dinner at my parents.  My dad and I had several disagreements mostly about my kids. He usually keeps his mouth shut even though I know he thinks they are badly behaved at times and doesn't really understand.  My  oldest was calling my youngest a loser so my dad said well your a loser then because your his brother.  I told him u shouldn't call ur grandson a loser. He said well, he shouldn't call his brother a loser. I said well, siblings do those kind of things.  Me and my brother did. He said not while he was around. He then made a comment about my kids never listening to me.  I said well, we didn't always listen to mom but that didnt reflect on her parenting. He said I don't want to talk about it. Fine by me! Later... My oldest called his brother the b word.  I sent him for a time out and he yelled and ranted and raved but did go for one.  My dad says why does he have to do that?  in a disbelieving tone.  I said probably because of his autism. Good thing he didn't say anything else cuz I was in no mood between disciplining my son and his comments. Later I had invited a friend over that has known my parents and I for many years. We were having a discussion about my friends  boyfriends stepson. Long story short because I don't really have her permission he said your not my real dad, I dont have to listen to you.  My dad said he should have responded then I don't have to drive you places, buy u things, do things for u etc.  My friend and I both disagreed and said that would just start an argument. My dad said it would make him grateful for the things the step dad did for him. I seem to remember times when I didnt want to do what I was told and my dad would respond by saying then I don't have to drive you anywhere or do things for u and that would make me just think he didn't care.   Of coarse I didnt think to say that. In the end of that convo I just ended up saying Its pointless to argue and my dad of coarse had to have the last word saying I think I have learned something in my ____years. Funny cuz I could have sworn my mom did most of the parenting unless we were really in trouble. What approach do u think would work if a child says your not my real parent?

Posted by Fighting for my Children at 12:39 AM No comments:

Today I was feeling kinda stressed. I was walking down the street with my son and he started making kinda annoying noises but it was just his way of being silly and having fun.  At first I told him to be quiet. Then I thought about it and said "actually do it again!" He was happy to oblige and we both made happy silly noises together. Im sure we both looked and sounded silly but who cares we were having fun and  by the time we finished our walk home I wasnt stressed anymore.   As we all know parenting kids with extra challenges can be stressful.  What do you do with ur kids for fun?  Please share ur silly stories!
Posted by Fighting for my Children at 10:42 PM No comments:

Fighting for my Children
Feedback and helpful advice appreciated. I am interested in reading blogs from other parents as I believe we can learn from each other. Autism is a spectrum disorder which means their is a broad range of symptoms. Some kids have some of them, others more. Common autistic traits -social difficulties -high frustration levels often resulting in tantrums -sensory issues-seeking sensory imput or avoiding sensory imput ex. some individuals with autism seek deep pressure and others don't like to be touched. Bright lights and loud noises can cause sensory overloads. -have trouble communicating emotions or cannot verbally communicate at all -no eye contact -lack of imaginative play -perservation of interests and activities-obsessing about certain topics or doing activities over and over -loves a routine, often will not like a change even a positive one if not prewarned My kids actually do a lot of imaginative play but all kids with autism are different. There are other symptoms but these are the ones that stand out from my "research" on autism and from my own kids.